DONATE TO THIS AMAZING CAUSE HERE 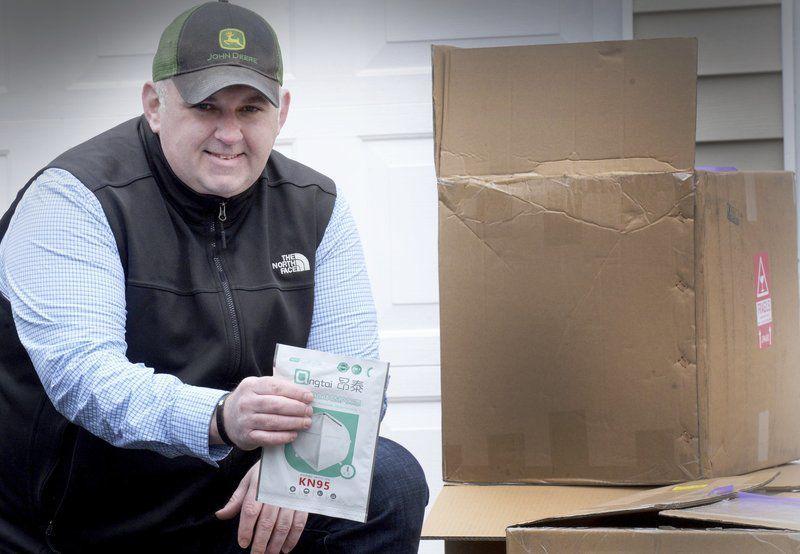 NEWBURYPORT – The first shipment of 2,000 protective masks arrived at the Hart Road home of Ward 6 city councilor and real estate agent Byron Lane about noon Monday and by later in the afternoon, they were already being given to hospitals and first responders.

Another 2,000 KN95 masks, the Chinese equivalent of the much-sought-after N95 masks, are expected to arrive at Lane’s home in the days to follow.

The masks’ arrival marked the end of a lengthy process that began more than a week ago and saw Lane work through a New Jersey-based company that he said employs a friend.

“It was a challenge” to get the masks delivered, Lane said.

Part of the problem was that the federal Food and Drug Administration has not approved the Chinese version of the masks for sale or distribution in the U.S. That has made hospitals across the country hesitant to accept donations out of concern they could be held legally liable, according to published reports.

Lane said most of the masks will be donated to nurses across the state along with ambulance providers, doctors and Anna Jaques Hospital in Newburyport. Fifty masks will be heading to fire departments in Newburyport, Amesbury, Newbury, Salisbury, and West Newbury.

“Everything we can do to cover who needs them,” Lane said.

In an emailed statement Monday, Mary Williamson, executive director of the Anna Jaques Community Health Foundation, said the hospital is “grateful to so many individuals, businesses and community based ‘go-fund-me’ initiatives that have stepped forward to support health care workers and first responders who are putting patient needs first in our first against the COVID-19 pandemic.”

Lane said he spent $16,500 upfront for the masks, but after putting the word out on social media and other sources, he collected enough donations to cover his purchases.

The idea to track down and distribute the masks came from two sources, the first being his mother — a nurse for 42 years at Beth Israel Hospital in Boston. The second came from the many calls he received from other nurses who said there was a desperate need for masks.

“It kind of hit home,” Lane said. “I sell houses, but there’s not a lot of that going on so I kind of took this on.”

"Betsy is amazing. Due to some complications on our end, the [...]